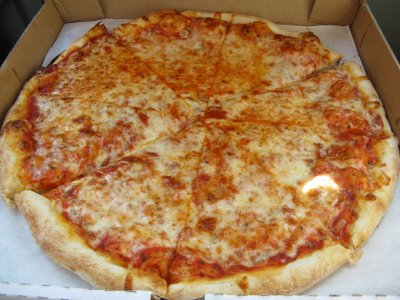 Pizza is unlike any other food in a few respects.

1) It is very rarely bad, if not always very good. I’ve had bad chow mein, I’ve had bad sandwiches, I’ve even had bad breakfast cereal, but I can’t recall ever biting into a slice of pizza and having a thought of disgust. Maybe minor disappointment, but never repulsion.

2) No one doesn’t like it. Pardon the double negative; it might also be fair to say that everyone likes it, but I’m trying to consider things like veganism, lactose intolerance, and freaks who don’t like “red sauce”. I would still say that those people don’t NOT like pizza, they just might have personal reasons to not eat it and therefore may not actively like it.

3) There is a >50% chance that any given pizza place will deliver to you. Think about that. If you are in any metropolitan or suburban area RIGHT NOW, I guarantee that there is a place nearby that will bring a pizza to you at little to no additional cost to the price of the actual food. Amazing.

There’s more, but what I’m saying is that pizza is the food of the people and it deserves at least as many cultural tributes as it has been granted in recent history. I made a pizza zine a few years ago and did a performance art piece about pizza in college, but that’s a story for another time. I decided to search my iTunes library for “pizza” and see what came up.

The Aquabats are a vaguely seminal pop-punk/ska band (presupposing that ska bands can ever really be considered seminal)  primarily enjoyed by 8th graders who skateboard (and people in their late 20’s whose musical tastes stopped evolving in 8th grade). They have elaborate costumes and stage names and Travis Barker drummed for them before he joined Blink 182. This song’s lyrical narrative explores the perseverence of high school students in overcoming the strife of forced cafeteria dining to eventually be rewarded with pizza on Friday. This is also the only Aquabats song that I really know besides their cover of “Video Killed the Radio Star”.

Charlotte Diamond – I Am a Pizza

Charlotte Diamond is this Canadian lady who used to perform children’s songs about fish and flowers and stuff at my elementary school. Her songs are truly insufferable if you are over the age of 9. This song was stuck in my head for literally 12 years until I finally purged it by finding it on the Internet, downloading it, and forcing myself to listen to it until my brain was satisfied and released it from my semiconscious.

There is no YouTube link for this because I have no idea where it came from or why it’s on my computer. Possibly used for the aforementioned performance art piece in college. It’s from The Best of Gemini: Music for Children and Families according to the embedded song information and it’s just a guy singing “It’s a pizza, it’s a pizza / Mamma mia, pizza pie” accompanied by really generic accordion music and flamenco guitar.

I did a post about Old Skull a couple of months ago and this is really some of their finest material. The chord progression is… well…. slightly repetitive but the lyrics are really gripping:

“I WANT EXTRA CHEESE/ I WANT MUSHROOMS AND ANCHOVIES AHHHHHHHHHH”

“IF YOU ARE LATE, YOU WILL GIVE IT TO ME FOR FREE!”

For those of you unfamiliar with Personal and Pizzas, they are essentially a pseudo-Ramones tribute band who draw the majority of their thematic elements from pizza (obviously) and teenage conflict. The Ramones’ lyrics are actually very easily modified to be about a steaming hot pepperoni pizza pie instead of a surly punk chick and their original songs make for some pretty enjoyable garage punk too. Download their whole album, Raw Pie, here.

Think I need to head to Arinell and grab a slice now.